Over The Rainbow 11pc Dice Set for RPGS With Kraken Logo

This item has been retired and is no longer in production. 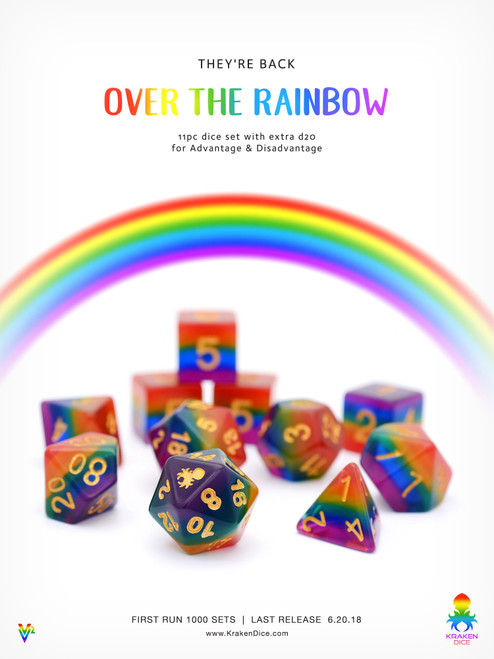 SKU:
KD0129
UPC:
Availability:
This item has been retired and is no longer in production.

Dark clouds gathered overhead as the party prepared for the task ahead. The sky seemed to plot against them as a bolt of lightning shot down from the sky, thunder booming, as the heavens opened and let loose the rain. For months they had observed the brigands while trying to learn every detail and routine; yet, despite all the planning, mother nature would be the one to thwart their efforts.

With a calm and serene presence Dhapheh lowered herself into the wet grass. Kneeling, she placed her hands in her lap and began to call to the sky. Mielikki looked down through the clouds as the druid called to her. Dhapheh had been a faithful and loyal servant to Mielikki for centuries and the druid’s intentions were pure.

The clouds began to dissipate, and the rain began to fade; the sun broke through the clouds as if Mielikki smiled down on them directly. Rich hues filled the sky as the vibrant prism took form. Dhapheh’s prayers had been answered and she would soon fulfill her duties and bring praise to her goddess, the party’s goal was once again attainable just Over the Rainbow.

Kraken Dice is proud to present with a special limited quantity EARLY RELEASE the newest addition to our Kraken family, Over the Rainbow. This eleven-piece set includes two Kraken faced D20’s, four D6, one D12, one D10, one D%, one D8, and one D4. These dice are made from semi-translucent layered resin and inked with metallic gold numbers.

The Island of Misfit Dice