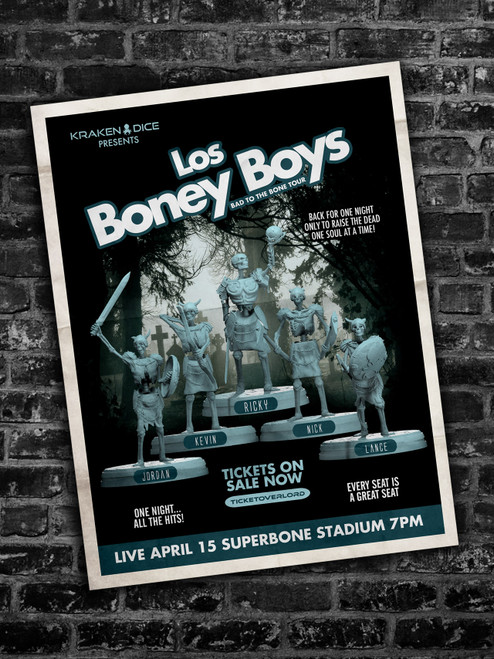 SKU:
Boy-Band
UPC:
Availability:
Usually ships in 2-3 business days
This Easter, the undead will rise.:
For one weekend only you can collect the entire band of undead. What they left in life continues to empower them in undeath.

Ricky: The self-proclaimed leader of the band, Ricky found success in life with multiple international hits including Magic Missile hits as hard as a Cannonball, Living la mala Muerte, and She Clangs. With a talent for acting and inspiring others, Ricky is used to directing and delegating his band to ensure that they are always providing the best group interactions possible.

Jordan: Possessing talent and proficiency with multiple weapons, Jordan favors the sword as “It lets me H.I.T.S all the right notes”. Even up until the moment of his death, Jordan was the consummate professional, letting all of his fans know not to worry “No matter what the executioner does, I’ll be hanging tough”.

Lance: The son of a small-town herbalist, lance found that he excelled at encouraging shop patrons to visit his father’s shop, serenading passersby with his local hit: Buy, Buy, Buy. After leaving the small-town life behind him, Lance joined the provincial army and found himself quickly assigned to a unit of foot soldiers. Even in his death, Lance provided inspiration to the medics and priests attempting to save him, melodically advising them that they were in fact “Tearin up my heart”.

Nick: The youngest of three sons, Nick found that sharing the spotlight with his older and arguably more musically talented and successful brothers, did not provide quite enough exposure as he had hoped for. Venturing out on his own, often being quoted as saying “It’s not my fault, I still get jealous”, Nick found some success as a solo performer. Shortly after, he crossed the path of a spiteful Baron’s daughter, finding himself pleading for freedom “You got me in chains”.

Kevin: Often considered to be the most intelligent and humble of his performing troupe, Kevin gave up the notoriety that accompanied his position deciding to instead seek out his own inner peace and take up a more charitable banner. After losing his father to an errant necromancer who continually played games with his father’s heart, Kevin used all of his previous fame to enlist the help of the townsfolk to put his father’s body to rest, the last battle cry being heard from the townsfolk “Everybody, Hackstreet’s Back”. This effort did not end well.

**Please Note: Promotional free miniatures are not covered by our lifetime manufacturing warranty**