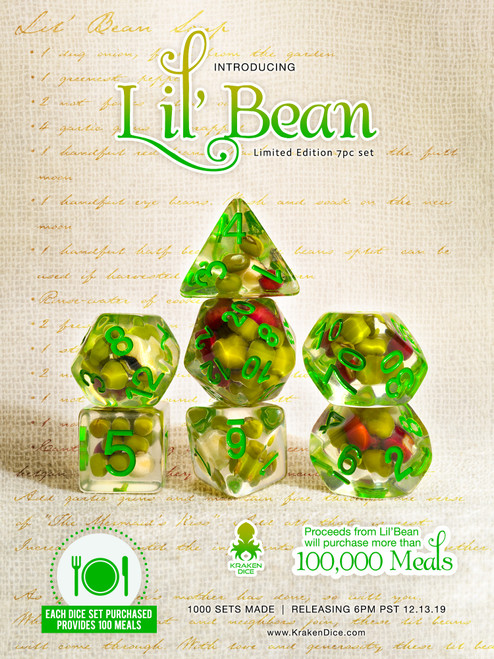 SKU:
Lil-Bean
UPC:
Availability:
Usually ships in 2-3 business days
Maximum Purchase:
99 units
Each purchase supports FeedingAmerica.org:
Kraken Dice will be donating 100% of the proceeds from the sale of Lil Bean to FeedingAmerica.org

Delmuth Tradi watched nervously as the small human child approached. Disheveled and unkempt she shyly smiled at him, holding out her bowl in hopes of a second serving of soup. With a subtle twitch of his pointed ears, he graciously obliged the request. The joyous giggle that escaped her sounded just like the first time Lil’ Bean had seen his little trick. The simple sound was so disarming that even his soldier’s training and Elven instinct were unable to steel him against the sudden memory of her.

It seemed he would never be able to overcome this annual reminder of his past sins. Six winters had passed since he found her, the embodiment of his cowardice and inadequacy, lying lifeless in the snow. The delicate features of Lil Bean’s face, blue from winter’s cold embrace, were barely visible above the snow line. Were he, not an elven archer, he would have easily missed her clipped ear protruding from the forest floor. His hands ached as his body re-lived that moment. He could feel the cold that took his finger as he recklessly clawed through the snow and ice trying to free her, to save her. Though only seconds, his heart spiraled through eternity in that moment. No previously suffered torture could have prepared him for that moment. For the last time, Delmuth’s self-indulgence had once again failed her. The sudden night storm had stolen her final breath and as he pulled Lil’ Bean’s rigid body from the snow he was met with her perfect smile, it was her mother’s smile.

That insufferable little half elf girl came to him almost 6 months past and nearly every day since. The nerve, this small child telling him that he could be so much more than a drunk ex-soldier, yet the conviction in her voice actually made him believe it. Had she not reminded him so much of vota, he would have chased her away that very first day. He still didn’t understand why she wanted his help since she seemed to be perfectly capable, but he supposes he did owe her. She also seemed very excited about whatever discovery she had to share with him. Hopefully it wasn’t just another bug pretty bug. a brief smile crossed his face as he eyed the fresh ale the barmaid set next to him, he was on a trump, and his luck was finally changing. One more hand and then he would, though begrudgingly, head to the church yard to meet lil. Delmuth’s smile quickly faded as he the flickering torchlight caught his attention, the sound of clinking glass erupted like a fireball being cast as his finished drinks were being collected. One, two, five, eight… when had he had eight drinks. Where was the sun? Lil… He had forgotten to meet lil. He cursed slightly under his breath as he admonished himself. At least she is young he though. She will get used to being disappointed occasionally, and I have at least won enough to buy her a nice meal for once.

The sun crept over the roof and onto his face, slowly waking Delmuth from the best night of sleep he had had in years, he struggled to remember the last time he was able to wake in a bed. It was glorious. A hot bath and soap were now a luxury, but even the cold streets were better than the orc torture camp. He watched as the scars on his chest began to turn deep red, he could almost feel the whip cracking against his skin again. He quickly tried to chase away the memories with little success, luckily there seemed to be something happening downstairs in the tavern hall. He strained his once well trained ears to hear what the commotion was over, and could barely make out that there had been a storm and someone was missing.

Kraken Dice will be donating 100% of the proceeds from the sale of Lil Bean to FeedingAmerica.org. We want to thank you all in advance for helping us provide over 100,000 meals to families this holiday season. Separate or additional donations to Feeding America can be made HERE.

SHIPPING
• Please allow 2-3 business days for order processing
• All orders are shipped USPS with tracking numbers, so no lost packages!
• Domestic shipping on orders under 1lb. is just $5, and only $8.50 for orders over 1lb. Orders greater than 2 lbs will receive additional shipping charges..

Rainbow In The Dark Vapor Dice Set with Silver Ink