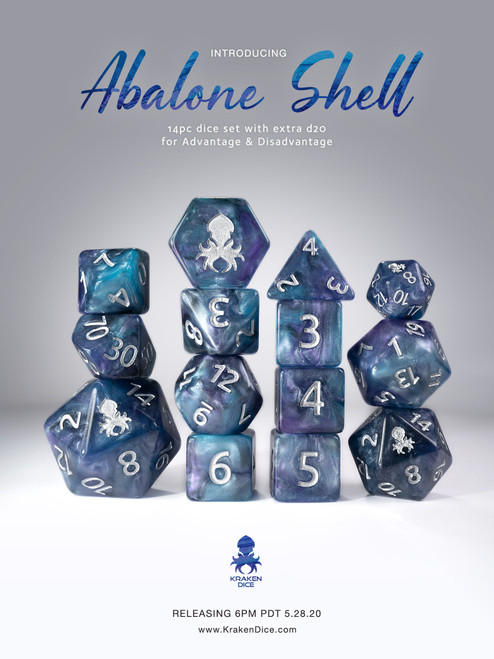 Doryma, giddy with anticipation, shook with an excitement he had not experienced since he was a small boy. The bazaar vendor had come from a tropic isle and had no idea what wonders he had in his possession. The shell seemed to mimic the ocean floor with gradients of light blue and purple as the sun caught each ripple and bump. The special component he had sought after was finally his, and it would unlock many new recipes, all leading to untold moments of wonder.

Kraken Dice is proud to share in Doryma's excitement with the newest addition to our Alchemical line: Abalone Shell.

SHIPPING
• Please allow 1 week for order processing
• All orders are shipped USPS with tracking numbers, so no lost packages!
• Domestic shipping on orders under 1lb. is just $5, and only $8.50 for orders over 1lb. Orders greater than 2 lbs will receive additional shipping charges..

Abalone Shell uses our new larger mold with our signature d2 and are being produced as test run before determination is made for them to become a regularly stocked item. The first batch we produced 1500 sets in silver ink.